Many Miles in May: Part Two

Last week Grant Cooper and I visited four middle schools with our program on Paul Robeson.  We went to Success Academy schools in Williamsburg and Cobble Hill in Brooklyn as well as Midtown West and Harlem West.  The photo below illustrates well the reception with which we have been honored at each school. 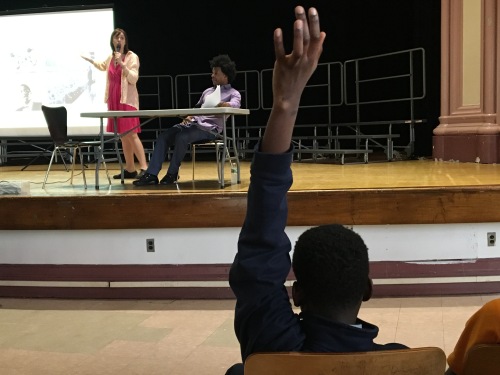 We have been gratified to see enthusiastic hands raised at each of our programs.  This is a testimony to the curiosity of the scholars as well as the inspiration of Robeson’s story.  At all of the schools, we have run out of time before answering all of the scholars’ questions.  And each time we ask them a question during the program, numerous hands shoot up to respond.

Scholars have been processing the elements of Robeson’s story quickly and analyzing it in new ways at each school.  For instance, at Cobble Hill, scholars keenly pointed out the lack of racial as well as gender diversity in an image of Robeson’s law school class.  At Harlem West, scholars understood the depth of Robeson’s emotional strength as well as his physical strength when he encountered racism on the football field.  Scholars at Midtown West noticed Robeson’s determination when we did not return bullying with bullying.  Our use of primary documents in the program did not escape the attention of the teachers and scholars at Williamsburg.

can get copies.  These scholars love to read!  We are donating copies of the book to the school libraries and a couple of schools are even buying copies for their students.  Several young debaters at Harlem West were excited to know that Robeson participated in debate in high school.  Robeson’s story seemed to resonate closely with these scholars in Harlem who were very knowledgeable about the Harlem Renaissance and the importance of that moment in history in which Robeson participated.

We hope to return to some of these schools to continue the dialogue about Robeson and African American history.  Many thanks to all of the schools who have hosted us.  It has already been a tremendous month!

Many Miles in May!

During the month of May, Grant Cooper and I will are busy traveling all over New York City!  We are visiting nine schools in three boroughs to perform ten shows of our program about Paul Robeson for fifth to seventh graders in the Success Academy charter school network.

Our journey started at Harlem North Central school where we had a great crowd of eager scholars. 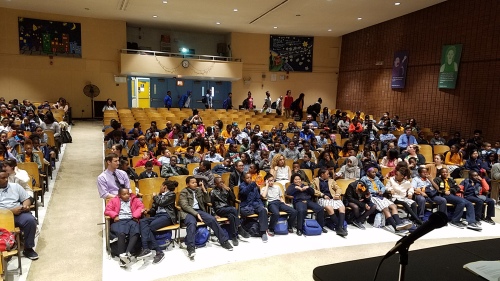 The students loved hearing about Robeson, especially since so much of his life was connected to their neighborhood in Harlem.  In fact, the YMCA where Robeson started acting onstage during the Harlem Renaissance is right around the corner from the school.  The scholars were genuinely curious and asked questions for almost half an hour after the program.  One scholar thoughtfully wondered why Robeson was blacklisted during the 1950s when later leaders, like Martin Luther King, Jr., were not.  Other scholars asked Grant about his stand-up comedy, and inquired as to why I wrote so many books about Robeson.  Young minds have a way of getting right to the heart of issues and people.

Our visit to Bronx One Middle School was very special as it is situated in The Paul Robeson Complex!

These fifth, sixth, and seventh graders had already heard of Robeson and were excited to learn more about his life and legacy.  They offered lots of comments when we asked questions during the program, and especially enjoyed the question and answer session until we ran out of time.  They were interested in all aspects of Robeson’s life from athletics to activism.  We will definitely have to return to answer ALL of their questions!  These young scholars love to read, and we can’t wait to get copies of my biography of Robeson into their hands.

It was so touching for Grant and I when numerous scholars came up after the program to thank us, shake our hands, and give us hugs as they left the auditorium.  We feel a special bond with these students who enter a building named for Robeson every day.  It is such a joy and a privilege to be able to share some inspiring history with these youngsters.  In turn, their inquisitiveness inspires us!  Many, many thanks to the teachers, principals and staff who have hosted us including: Britney Weinberg-Lynn, Geoffrey Fenelus, Emily Mulkerne, and Tori Sonlin.

Stay tuned for more reflections on our middle school visits in May ….